MURDER in the MAGIC CITY 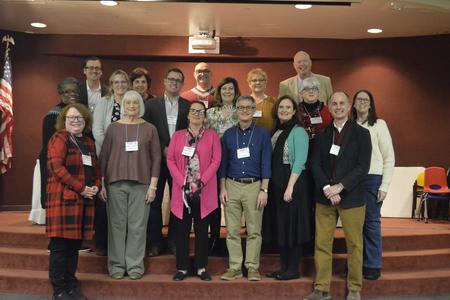 PLANNING FOR 2023 IS UNDERWAY!

Can you believe it? In February 2023, it will be twenty years since we began this conference. Our first conference was Saturday, February 8, 2003, and featured the late, great Meg Chittenden and Lee Child.  This is not, of course, our actual twentieth event, due to a break caused by COVID-19 and other events, but we are going to celebrate it like it is our anniversary.

A couple of years after we began, Tammy Lynn from the Wetumpka Library approached me and asked if her library could do a “piggyback event” with us to raise money for them. I was skeptical at first, since MMC took up a great deal of my time and I didn’t want to add to that, but decided to give it a shot.  It has resulted in a close personal friendship with Tammy and Murder on the Menu has become an important yearly fundraiser for the Wetumpka Library.

We certainly have had our ups and downs, especially hotel problems, but after twenty years this event has become something I’m really proud of.  Tammy had a great idea to celebrate.  Why don’t we see how many of our favorite authors we can get to commit to coming back to Alabama in February 2023?  We have had some delays, but are working on getting our authors invited and will update this website often in the coming weeks.

​Every year, Murder in the Magic City does a gift basket auction to raise money for charity.  The baskets contain gift items and one mystery novel--often, but not necessarily, by one of our guest authors.

In past years, we have given money to Adult Literacy causes and The Crime Lab Project.  Almost all of the baskets are put together by my extremely wonderful and talented mother-in-law, Lynda Fenton.  So  I let her pick the charity.

This year will be donating to Chloe's Fund.

Debby Nelson and her husband Glen founded Chloe’s Fund in 2017 after the death of their beloved pet, Chloe.  Chloe had a life of love, travel and joy.  Sadly, she had diabetes and Cushing’s Disease for many years and finally her little body just couldn’t survive.  Unlike our beloved furry family members, most of the animals at shelters have had lives of sadness and neglect.  One of the greatest needs continues to be a medical fund for the animals in the shelter.

Chloe’s Fund was formed to provide for the medical needs of Florence Shelter animals. They take donations from the public and will be the recipient of this year’s money raised from the silent auction. Chloe’s Fund provides medical care for the animals and ensures the donations are spent responsibly, wisely and carefully. To date, they have been able to help over 400 animals.  They pay for emergency visits as well as surgeries for sick and injured animals.  They have raised over $87,000 since the beginning.  They are a 501c-3 non-profit, and checks should be made to Florence Shelter with Chloe’s Fund as the memo. Chloe’s Fund is so grateful to everyone who participates.

The baskets will be on display and auctioned silently throughout the day at Murder in the Magic City.  They start at very affordable prices.  Please consider bidding and therefore donating to this extremely important cause.

Julia Spencer-Fleming sends her apologies but she is snowed in in Maine and has to withdraw.

*Lissa Redmond sends her
regrets but has had to withdraw.